The Providence of God shown through Ruth 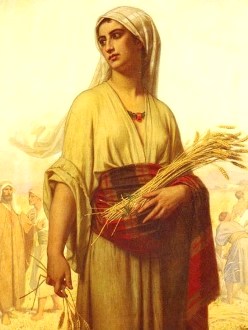 I would like to take this opportunity to look at the example of two women in the Old Testament, Ruth, and Naomi. This was at the time when the Judges ruled in Judah. Naomi and her husband Elimelech and their two sons Mahlon and Chilion went to live in Moab because of the famine in the land of Judah.  Elimelech died leaving Naomi and her two sons.

Naomi’s two sons married Moabite women. Their names were Ruth and Orpah they lived there for about ten years. Then both of Naomi’s sons died, leaving her with her two daughters-in-law. Naomi decided to go back to Bethlehem. Her two daughters-in-law wanted to go back with her. On  the way Naomi tells them to go back to their mother’s house and stay there and marry and have children, and Naomi continues to say, “The Lord deal kindly with you, as you have dealt with the dead and with me….they lifted their voices and wept.” -Ruth 1:8-9 (NKJV).  Here she refers to the way Ruth and Orpah treated her. They loved her. They wanted to go back with her. Her unselfishness shines here. Naomi was not thinking of herself but of them. Here was this lonely old lady going back to an empty house, she was not thinking of herself but of Ruth and Orpah. They were still young they had their lives before them. Orpah goes back but Ruth clings to Naomi and says:

But Ruth said:
“Entreat me not to leave you,
Or to turn back from following after you;
For wherever you go, I will go;
And wherever you lodge, I will lodge;
Your people shall be my people,
And your God, my God.
17 Where you die, I will die,
And there will I be buried.
The LORD do so to me, and more also,
If anything but death parts you and me.” – Ruth 1:16-17 (NKJV)

Such beautiful thoughts and words.  They continue their journey and reach Bethlehem. Ruth does not sit around but goes out and gleans in the fields for food for her and Naomi. Ruth meets Boaz who is a close relative. Boaz heard about the way that Ruth treated Naomi and that she was a virtuous woman. Naomi makes sure that Ruth will have security in the future. Ruth and Boaz marry, and God blessed them with a baby boy named Obed who was the father of Jesse the father of David. They were so blessed to be in the lineage of Jesus. In the book of Ruth, we can see the providence of God. I hope that I have whet your appetite to read through the four chapters of the book of Ruth.

Home » Ladies Pen » The Providence of God shown through Ruth
a